How Ancestry Can Change a Person’s Life

From left to right, Aunt Jean, Aunt Sheila, my Grandma

Early Life in Queens
When people do Ancestry usually their intentions are to find out more about their heritage and find out more about their ancestors. But there is a much bigger outcome to this story. My Grandma, Joan Hanley was born in 1946 and raised in Queens with her twin sister, Jean and her older sister Patricia. Her parents were Isabelle Recame and John Hanley. Isabelle was half Italian, quarter Welsh and a quarter English. After Jean and Joan’s birth, their parents separated and their father was not very involved in their lives. Their parent’s s separation caused Isabelle to get a job as a telephone operator while John was in the military. The sisters did not know about their Dad’s side of the family. Sure they met some of them to an extent when they were younger, but did not maintain a relationship with them and did not see them as their Dad became less involved in their lives.

From left to right, my Grandma, John Hanley, Aunt Jean

The Discovery
The sisters got older and had children. Jean’s son Michael did Ancestry. When you do Ancestry they match you with people who share DNA with you. When Michael looked at the results an unfamiliar name came up, Sheila Milo. Michael did not recognize the name and called his mother Jean and asked her about it. Jean also did not recognize the name and she decided to do Ancestry as well hoping to find out more about Sheila and their connection. Sure enough Sheila’s name came up saying the two shared DNA. Jean was confused and messaged Sheila and compared notes. They eventually came to the conclusion that they were half sisters.

Early Life in the Bronx
A young girl named Sheila was adopted when she was three months old in 1949. Sheila was raised in the Bronx alongside her adopted brother, Stephen. She was raised by her parents Barnett Kaufman and Frances Miolla. Her father was Jewish and her mother is Italian. Her father was a police officer in the Bronx and her mother was a band singer and went by the stage name “Charlene Frances”. Sheila found out she was adopted when she was around three years old and always wondered about her biological family. Her biological mother did request a picture of Sheila when she was three months old, but that was the last form of contact between the two. Sheila said ,”I had always wanted to be biologically Italian and my mother said, “You’re half Italian, half Irish”. Sheila’s friends growing up had sisters and Sheila had always told her friends that she wanted a sister. Sheila spent the rest of the her childhood wondering about her biological family.
The Discovery Part 2
This was obviously a shocker to Jean finding out she had a sister at all. The night Jean found out she called my Grandma. Jean said, “I have news”. “What is it”? asked Joan. Then Jean shared, “We have a sister, a new sister”. Those words altered life a little. It took a little while for my Grandma to process this and was pretty stunned. I was in Clearwater, Florida at this time. I remember getting a call from my Grandma to wish me a Happy 14th Birthday, telling  me she had news that was going to make me fall on the floor in shock. She told us about Sheila and Jean’s findings. It was definitely a shocker for me and my family. Having known what it was like for my Grandma to grow up without a father and finding out all this information took a lot to process. But at the time I found it very fascinating that she found out she had a long lost sister. When Sheila found out she had a sister she cried.  When Jean asked about Sheila’s mom Sheila did not know anything. Sheila had wrote to New York State about her birth certificate. But her mother’s name was not on her birth certificate, the only name on there was John Hanley. All they told Sheila about her biological mother was that she came from a strict Italian household, and that she has three brothers and two sisters. Sheila invited my Grandma and Jean to her house upstate. Unfortunately Patricia died in 2003 and did not get to meet her half sister. But I told my Grandma that it’s like you lost one sister and you’re gaining another one. The picture of the three meeting for the first time is shown on the 1st page. Information about Sheila’s biological mother’s name is still unknown. I got to meet Sheila during the Jewish holidays about a year after my Grandma met her. 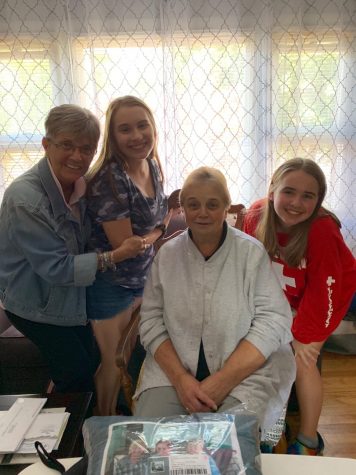 From left to right, my Grandma, me, Sheila, and my sister

Meeting Sheila
Luckily for all of us Sheila only lives 2 hours north of where we live. So we got to meet her, her husband Tom, and her daughter Christine during a trip upstate. They were all very welcoming and we had spent the whole time chatting about Sheila’s childhood, my Grandma’s childhood, and all of our lives for a good couple of hours. I found it very nice to introduce myself to new family because that’s the reason why I did ancestry in the first place to find more information about my family. It felt very comfortable and easy to talk to all of them and I admire the relationship that my Grandma can maintain with her new sister. They call each other often. The lesson in this story is that you never know too much information on your family! 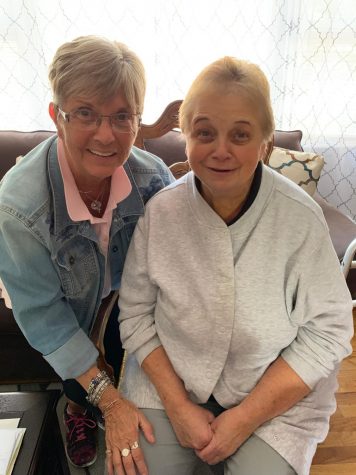 Effects of Ancestry
Ancestry DNA is a collection of tools in researching your family tree. Some ancestry’s findings are good and some are bad and ugly. At times it brings families together. Also, at times it can create problems where we would rather not be involved. We can find out about illnesses in some DNA companies and the loss of loved ones. It gives people a sense of history where we may learn from the past. On the other hand, some individuals worry about what they may discover, may come with some risks. DNA testing jeopardize people’s privacy. Combining the pros and cons people should stop and think about the DNA processing, but in my story it turned out to be a happy ending.