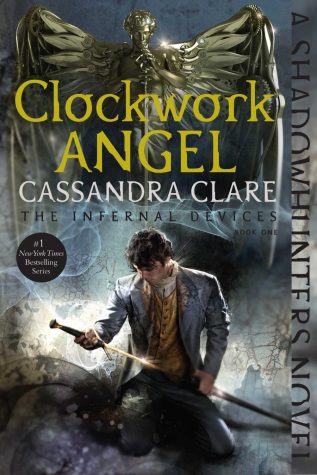 “Something in her face must have changed, for the confidence went from his expression and he lunged toward her, his arrogance gone, reaching desperately for the knife. Tessa spun away…turning to face the fountain…The last thing she saw was the silvery water splashing high above her as she drove the knife towards her chest…”
Sixteen year old Theresa or Tessa Gray is pretty much your average New Yorker, living a life faced with standard challenges in the late 1800s. That is until her Aunt Harriet, the only family member she had left to live with dies, and her brother reaches out to her to live with him in London. For the first time in what feels like forever, Tessa is finally excited to see her brother again and get a chance to explore a whole new city. However, she just can’t catch a break when as soon as she gets to London, she is kidnapped and held hostage by two women. Tessa is then forced to go through months of excruciating “training” with the two women, to unlock some hidden power, in order to keep her brother alive. Little does Tessa know that this training would be what shoves her in the face of a whole new world, when one night, a debatably insane boy springs Tessa from her kidnappers, and takes her to the Institute, a home for Shadowhunters. Shadowhunters are half human and half angel warriors, almost like supernatural police that keep the human world safe from demons. Usually a case like Tessa’s would be a piece of cake to them, but this time their enemy is something that has never been made or seen before in the history of the shadow world. As the Shadowhunters try to figure out what Tessa is, and what she was trained for, Tessa finds herself stuck with two mysterious Shadowhunter boys, William Herondale and James Carstairs, who help Tessa conduct her own investigation to find her brother. Will the Shadowhunters be able to discover the hidden meaning behind Tessa’s arrival before this unknown threat takes out the entire city- human and shadow world alike? Or will Tessa actually be able to outsmart the sly vampires, snarling werewolves, witty warlocks, before her supposed birthright comes to take her and unravel her world forever?
“The Clockwork Angel,” by Cassandra Clare, is a book that hooks you in and drags you on an adventure all over London, following the trail of Tessa, William, and James as they try to figure out the clues behind one of the craziest plans London has ever seen. One of my favorite parts of this book was definitely the characters since they all had really interesting backstories that shaped how they interacted with the same people in such different ways. Clare was somehow able to make two characters seem so different on the outside, but when you look deeper into them you can see the similarities that either create really strong bonds between them or push them even further apart. For example, William and James came from two different lives and when one is always cynical, sarcastic, and outright mean to most people and the other is compassionate, kind, and open minded, they both have reasons that stop them from accepting the love that exists around them. This ultimately makes them each other’s exceptions to the rules they create for themselves. And of course another one of my favorites about this book is definitely the plot. In this book, Clare uses a lot of original plot twists, and imagery is definitely her strong suit as the words that she put on the page come to life and create startlingly real and vivid pictures. And if you look past the wonderful supernatural world that Clare created, it is a book about a young woman who is struggling with her identity, the real concept of family, and what it means to actually be human. Thus, If you liked this review I definitely encourage you to read “A Clockwork Angel,” by Cassandra Clare because not only will it introduce to you a setting that has almost never been seen before, but it also is just the tip of the iceberg to the whole Shadow World being at your fingertips.
And remember… “THE INFERNAL DEVICES ARE WITHOUT PITY. THE INFERNAL DEVICES ARE WITHOUT REGRET…THE INFERNAL DEVICES WILL NEVER STOP COMING.”