Esther’s Theater: Once Upon a Time (season 5) 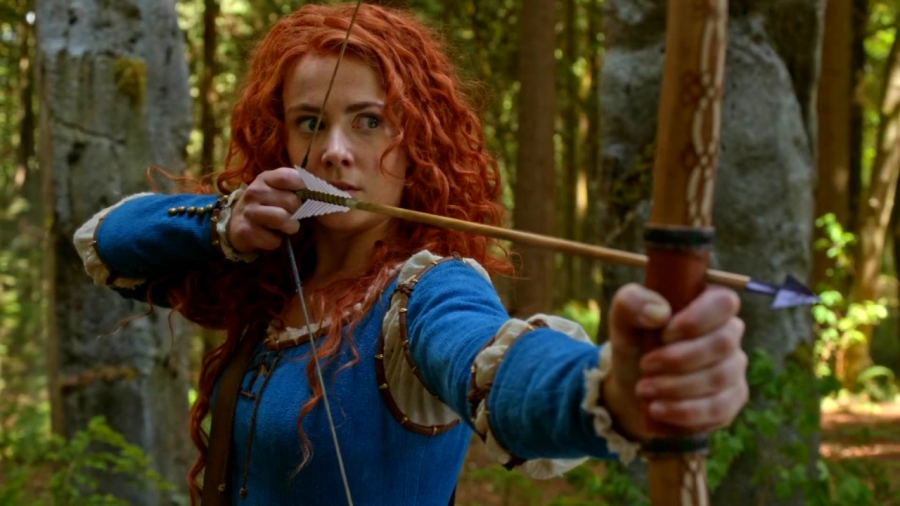 Once Upon a Time (season 5): Merida

Season 5 picks up with Emma being the dark one. The dark magic took Emma into the fairytale realm and Emma was learning the history of being the dark one. The first ever dark one was Nimue. Nimue was Merlin’s lover but she wanted power. The power she received was dark magic and she became the darkest being in the magic realm. While discovering the history of dark ones past, Emma crossed paths with Merida. She was about to unleash evil on Merida but showed her mercy. Merida’s kingdom was taken over and her brothers were going to be executed. Her plan was to get her

kingdom back and get revenge, but Emma’s act of mercy convinced her to show mercy to those who took her kingdom.  In order for Emma to be free of the dark magic or overcome it, she needed Merlin. Emma, Snow, Henry, Regina, Robin, Zelena and Belle went to Camelot for answers. There they met Lancelot, Snow’s old friend. He warned them about King Arthur. He said that King Arthur wasn’t the hero he claimed to be. In Camelot’s dungeon Merida met Lancelot. After they were freed, Merida went to retrieve her kingdom. With the help of Belle, Merida showed great courage by taking a stand against those who took over her kingdom. She then went to seek justice for her father that passed. He died in a battle and Merida blamed herself. Mulan had lost her honor and chased money until Merida confronted her. Merida asked her to help. Ruby (Red Riding Hood), Merida and Mulan followed clues. They found a torn cloth from the battleground Merida’s father died. They found out that Arthur was the one who was responsible for her father’s death. While in Storybrooke, the everyone woke up with their memories lost. Another curse was enacted and memories were taken. It was revealed that the one who cast the curse and stole the memories was Emma. She was trying to hide a secret. During that time they were in Camelot, Hook was dying. In order to save him, Emma made him a dark one. This was when the audience found out

that there could be multiple dark ones at a time. In Camelot after Hook found out what Emma did, he hated her and turned evil. Emma cast the curse so that Hook and the rest of the town would forget, so that everything could go back to normal. With the help of Zelena, Hook was able to get his memories back. After he remembered, he went back to being evil. He welcomed all the past dark ones to Storybrooke. The past dark ones were dead so in order for them to roam the earth, they had to mark someone in Storybrooke. Hook realized the huge mistake he made and asked Emma to let him go. Through his sacrifice, the dark ones disappeared. Emma, Regina, Snow, David, Robin, Rumpel and Henry went to the underworld to get Hook back.  On their way there, Emma fell asleep and Neal appeared in her dream. He told her that he wouldn’t be there because he found peace. When she woke up, they arrived at the underworld. It looked exactly like Storybrooke with a darker feeling and a fallen clocktower. There were many familiar faces like Cora, Henry (Regina’s father), Cruella, Peter Pan, Gaston and James (David’s evil twin brother). Everyone who was in the underworld was there because they had unfinished business and couldn’t find peace. In the underworld, we were introduced to Gaston. Gaston was supposed to marry Belle in the past but Belle fell in love with Rumpel. In the flashbacks of Belle and Gaston, Gaston was a good guy until Belle found out the truth. Hades and Gaston had a mutual rival, Rumpelstiltskin. Hades gave Gaston a bow and arrow that was enchanted with magic so that Gaston had a weapon against Rumpel. Gaston was pushed into the River of lost souls. Cora was in the underworld because Snow killed her. Cora wanted Regina to leave the underworld and go back to Storybrooke because she knew Hades was unhappy with her visit. Regina’s father Henry wanted Regina to stay

because she was finally the good person he wanted her to be. Both Cora and Henry were able to find peace. Cruella knew that Henry was the author and wanted him to write her back to reality but he refused. Peter Pan asked Rumpel to find him a way out of the underworld. Instead Rumpel tricked him and gave him a fate worse than death by sending him into the River of lost souls. Another character we were introduced to was Hercules. Snow and Hercules knew each other when they were younger. Shortly after they crossed paths, Hercules died in a battle with the cerberus. Snow and the Storybrooke characters helped Hercules find peace. The Storybrooke characters came to the underworld to save Hook but helped so many other characters find peace. There was no way to bring Hook back to Storybrooke so everyone left without him. Hades followed them back to Storybrooke with Zelena. Before entering the underworld, Zelena gave birth to her daughter and became good. She wanted to live a life of good with Hades. Hades tricked everyone into believing that he changed. When he came back to Storybrooke, he killed Arthur. Arthur arrived to the underworld and took accountability for everything

unfavorable he took part in when he was alive. He became king of the underworld but made it a place where people could find peace. Unlike Hades he made it a world where people could find their unfinished business and move on. Hook knew that Hades needed to be defeated and looked for any information that could defeat him. He was able to tell Storybrooke that they needed the olympian crystal to defeat Hades. Regina and Robin went to confront Hades about his lies. Hades explained that he had the olympian crystal and that it was a powerful weapon. He explained that the olympian crystal was immediate death, no underworld, no chance of moving on just death. He was going to use it on Regina but Robin sacrificed himself for her. Robin Hood died at the hands of Hades. Regina told Zelena what happened and Zelena refused to believe it at first. Zelena used the olympian crystal on Hades. Zeus thanked Hook for helping to defeat Hades and allowed him to go back to Storybrooke. Hook had a second chance at life. Regina was heartbroken over Robin’s death because he died but Hook was alive again. In the season finale, Jekyll showed Regina a potion to separate her good and evil side. The Evil Queen and Regina were now two separate people. In Storybrooke, Jekyll’s evil side Hyde arrived.
My review:
Season 5 was good. Bringing back deceased characters made it a lot more entertaining. The storyline of Hercules and Snow along with Belle and Gaston’s storyline was amazing. Merida’s plot was probably one of my favorite plot lines in this whole show. Bringing in Hades and the underworld was an interesting take. I was not expecting Robin’s death and it was disconsolate having to watch Regina lose another happy ending. Before King Fergus died he told Merida “If you remember what you’re fighting for, you’ll never miss your target.” After his death, Merida kept reciting this to herself so that what happened to Fergus never happens again. Merida blamed herself for her father’s death because right before his attack, Merida shot an arrow to save him. The arrow missed Arthur and Arthur killed her father. This gave Merida an immense amount of guilt but it wasn’t her fault. You can’t blame yourself for failing. You can’t spend your life constantly wondering what could’ve happened if things were different, if you succeeded. Through magic, Merida was able to talk to her dead father and he told her it wasn’t her fault. He explained that he was so proud of her. You can’t blame yourself for what happened it the past because you can’t change it. You can’t change the past but you can build a better future. You have to forgive yourself.

As King Fergus once said, “If you remember what you’re fighting for, you’ll never miss your target.”