Esther’s Theater: Once Upon a Time (season 3) 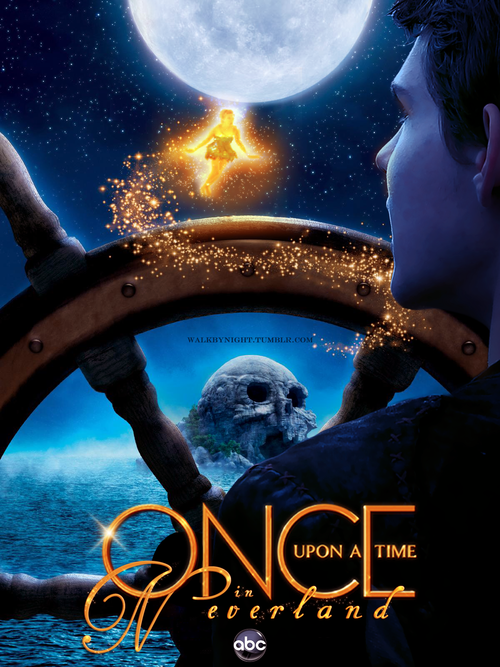 Once Upon a Time in Neverland

Disney+ shows: Once Upon a Time
“That’s how you know you’ve really got a home. ‘Cause when you leave it… There’s this feeling that you can’t shake. You’ll just miss it.”

Greg and Tamara landed in Neverland and were shocked to find out they who they were really working for. They thought they were working for people of science but they were actually working for a teenager by the name of Peter Pan. Disney portrays Peter Pan as a protagonist but in this show, he is the villain in the first half of this season. We also learn about how Regina ruined the lives of the little mermaid, Ariel and the fairy Tinker Bell. Emma, Regina, Hook, Snow, David, Neal and Rumpel all went to Neverland to save Henry. Peter Pan had Wendy Darling as a prisoner and eventually captured Neal too. Peter had Henry too but treated him well. He didn’t treat Henry like a prisoner, he treated hi, like family. Peter wanted Henry’s heart, the heart of the Truest Believer. He needed it because he was dying and in order to be immortal he needed Henry’s heart. After Henry fell for the lies and almost died, Emma, Regina and Snow were able to get him back. Peter Pan followed Henry back to Storybrook and enacted another curse but it couldn’t be stopped. Rumpelstiltskin defeated Peter Pan and saved Storybrooke but Pan’s curse was still coming. Regina could only contain the curse at the price of never seeing Henry ever again. The curse wiped Emma and Henry’s memories and sent the fairytale characters back to the Enchanted Forest. However, the fairytale characters didn’t

lose their memories this time. Emma and Henry went to New York with no memories of Storybrooke; the rest of the town went to look for Snow’s castle in the Enchanted Forest. The fairytale characters were shocked to find out that someone had taken over Snow’s kingdom. They had no idea who took over until they saw flying monkeys. In the midst of the chaos with the flying monkeys, Regina saved a little boy named Roland. Roland was Robin Hood’s son. Regina had a plan to get the castle back and Robin followed her to help. The Wicked Witch Zelena was the one who had taken over the castle and revealed to Regina that they were half-sisters. Cora gave Zelena up but kept Regina so Zelena wanted to travel back in time. Zelena hated Regina because Cora abandoned her but kept Regina. Desperate to defeat another villain, the only way was through Emma. Emma was in the real world so Snow and David cast a curse to get back to Storybrooke. Emma and Henry were living in New York with no memories of Storybrooke when Hook showed up. Hook gave Emma a memory potion and she remembered everything. There wasn’t enough potion for Henry so he still knew nothing. Emma took Henry back to Storybrooke with Hook. After returning to Storybrooke, it was revealed that the  fairytale characters had lost their memories again. With no memory of

what happened during that year, everyone blamed Regina. One day, Neal showed up to Storybrooke and saw Emma and his father Rumpel. Rumpel knew the identity of the wicked witch but if in order to reveal it, Neal had to die. Neal died for the good of storybrooke. At the end of the season, Regina and the heroes arrested Zelena. Regina was able to use light magic for the first time. Rumpel went to get his revenge on Zelena for it was her fault Neal was dead. Rumpel thought he succeeded but Zelena escaped. Zelena made a time portal before she was defeated and managed to escape there. Nobody knew where Zelena was. Hook and Emma ended up falling through the portal as well, not knowing that Zelena also went through that portal. Emma and Hook went back in time but messed something up, they brought someone back with them. Emma and Hook brought a woman named Marian back as well as an urn that fell through the portal. As Robin and Regina were developing a happy relationship, Emma explained what happened with the time travel portal. She was introducing Marian to Regina when Robin recognized her. Marian was Robin’s wife. Marian would’ve died in the past timeline but Emma brought her back, saving her life. This made Robin and Regina’s relationship a lot more complicating, potentially leading to the end of their relationship. Regina was finally happy. She found a new lover but in Storybrooke, like all fairytales “The game is rigged, villains never win.” After trying so hard to be a hero, this just proved to Regina that she would always be the villain.
My review:
Season 3 was the best season of the show. The storyline with Peter Pan being evil was an interesting take. The show did a great job. Introducing new characters like Ariel, Tinker Bell, Wendy, Zelena and other characters from Oz were one of the best aspects of this season. There were a lot of amazing plot twists in this season as well. The Peter Pan storyline taught me that sometimes its easier to ignore someone that hurt you than to face them. When people hurt us, a lot of us struggle with confronting people. This is because we don’t want to relive the pain it gave us. It’s easier to act like we weren’t hurt than to face it. In Neverland, Emma told Neal that she was hoping he was dead. Not because she wanted to lose him, but because it was easier to move on from the pain then to be confronted by it. We are all scared to be confronted by pain but sooner or later, we have to face it. Zelena’s plot reinforced the idea that “heroes do what’s right not what’s easy.” When Regina defeated Zelena, she could’ve destroyed her but instead imprisoned her. She didn’t mistake vengeance for justice. Neal’s death taught the lesson that it’s never too late to do what’s right. Right before Neal died, Rumpel chose him over power. In the past, Rumpel always chose power and even abandoned Neal for it. When Neal was dying, he died knowing that Rumpel chose him and did the right thing. It is never too late to do the right thing. The season finale taught the lesson that at some point, you have to stop running. Emma kept running away from the people she loved because she didn’t want to hurt them. She was so used to the idea of being alone that she never had someone to rely on. She only learned to open up when she thought Snow White died. At some point, you have to let people in and in order to do that, you have to stop running. You’ll know to stop running when you’re finally home. A lot of people don’t feel a sense of stability but you have to make the decision to stop and stay. “That’s how you know you’ve really got a home. ‘Cause when you leave it… There’s this feeling that you can’t shake. You’ll just miss it.” It will take a while to feel a sense of comfort.  You’ll have known when you found it because when you leave it, you’ll miss it; but you can always come back.

As Neal Cassidy once said, “That’s how you know you’ve really got a home. ‘Cause when you leave it… There’s this feeling that you can’t shake. You’ll just miss it.”