Carle Place: A Deep-Dive into its History 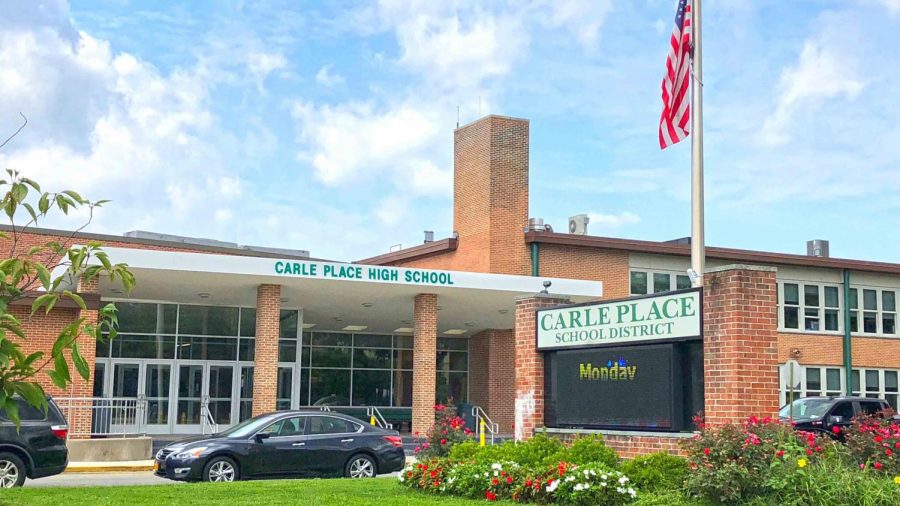 Carle Place: A Deep-Dive into the History of Our School

We originally came across this idea when we stumbled into a long-forgotten page on the school website titled, “The History of Carle Place.”  The author, Eddie Kim, did a comprehensive dive into the history of our town, but he left out a great deal regarding our school. Using sources found in the library, and from our very own principal’s collection, we were able to uncover Carle Place Middle and High School’s rich history.

Before we dive into the history of our school, let’s begin at the start of our research journey. At first, it was very difficult to obtain information about our school, for there was very little information on the internet about it. We decided that out next move should be to look in the old yearbooks. We found some intriguing information throughout the books belonging to the 1950s to 2020. After we examined the yearbooks, we interviewed the current Principal of Carle Place, Mr. Depaola. He told us some fascinating facts about the past, and we will be sharing his accounts in the following paragraphs .

The Yearbook first published in 1957– the first year Carle Place started admitting students. From the outside, the yearbook looked like an unassuming white book. In it were just a few pictures here-and-there, some facts and figures, and photos of the class of 1957– a far cry from what our yearbooks look like today. Today, there are fancy photos from prom, hilarious tales of classroom incidents, and an overall accurate retelling of the student’s academic career. But in some of the original yearbooks, we found a few interesting facts, like the fact that the first musical/play that the school did was the “Arsenic and the old lace (1956),” a play about murder and crime. The original band director was Eugene Timpano (whom the Rushmore auditorium is named after). He directed a band of only 17 elite students notoriously called the “dance band.” Performing during the holidays and for musicals, the chorus was made up of 55 members who were led by the students. Fun fact: our school used to have a reverend who would give prayers at the start of the day. He was named Mr. Lloyd Bell of the Saint Mary church. Furthermore, the student body government had only 4 members, with the class president being Gordan Canyok.

The school we have come to know and love started construction on November 21, 1954.  Surprisingly, it took only about a year for the school to finish construction (11/21/54-11/13/55). Before then, students k-12 would attend class in Rushmore. Little known fact: in the basement of Rushmore, there were classrooms designed to accommodate high schoolers. Of course, those classrooms have since been discontinued. The school itself was designed by architect company Knappe and Johnson for two million and one hundred dollars; adjusted to account for inflation today, this is roughly equivalent to eighteen million dollars. *Disclaimer, this does not include the cost of furniture or school equipment.

Originally designed to only accommodate 1000 students 7-12, the school needed to expand a few decades later as housing only 500 kids was quite difficult in this small school. If you look at the school plans from the fifties, it was significantly smaller than the one today. For example, the whole middle school, including the quad, library, home-and-career classroom, and cafeteria, was non-existent. In fact, the wall on the left side when you walk out of Mrs. Ostroff’s room is made of bricks. Th0se bricks on that side of the wall are from an old entrance to the school, and that used to be an outer wall.  Also, have you ever wondered why there is a ramp connecting the middle school to the high school? Well, if you open the door, it will read “The Library” because that was where the old library was located. The size of the original library was quite small, it was about half the length of the library we have now.

In the mid 1970’s as more-and-more people started moving to Carle Place, there was a pressing need to add a middle school to the preexisting high school. The School Board decided that a middle school was needed, so in the mid 1970’s, construction began. At first, they destroyed the old library to make room for a quad of classrooms. then, they created 4 courtyards when constructing the middle school. The old entrances were no longer there, as they have been boxed off.

There are a few ways you can tell the difference between the original layout of the school and what has been added since. You can tell which portion of the school was built later by the distinctive materials used on the wall and floors. The older portion of the High School has brown tiles on the floors. However, the middle school walls are made of white tiles on the walls, as well as white tiles on floor. Also, the ninety-five wing of the High School also has these newer materials. About 15 years ago, the lockers in the High and Middle schools were refurbished. Before, they looked like the ones upstairs. Also, most of the main lobby, auditorium, conference room, and two science rooms has been refurbished. This is the reason why those areas look so new compared to the rest of the school. Also, the boys gym and the multiple purpose rooms are new. The boys gym was added in the late seventies and the multipurpose room was added a few years ago. Before our gyms were co-ed. Now we have two girls locker rooms, when before one was boys and the other was the girls.

This concludes our investigation into the history of Carle Place Middle and High school. If you have a question please feel free to leave a comment.

Special thanks to our principal Mr. Depaola for the invaluable information that he provided. This article would not have been possible without the documents and accounts that were provided by him. Also big thanks to Mrs. Feit, our librarian, for her help in lending us a safe space to conduct our research for this article, and for providing us with the yearbooks that were instrumental for the production of this article.