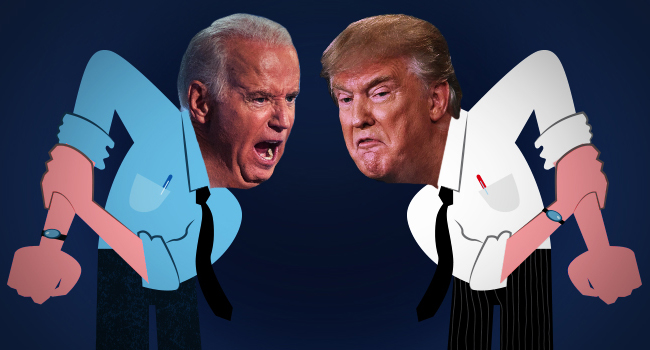 Pictured featured from Metro News of Trump vs. Biden as if they were at a wrestling match

As Americans know, the second and final 2020 presidential debate was last Thursday. This 90 minute debate was between the two party candidates President Trump, and former Vice President Joe Biden. This debate was moderated by Kristen Welker of NBC. This followed the September 29th debate moderated by Fox News’ Chris Wallace. The first debate was controversial because of the constant interruptions coming from both candidates, even aimed at the moderator. Many Americans were hoping for a very different tone for this debate compared to the last one, where many described it as an embarrassment for our democracy. So it was clear to see Americans wanted the upcoming debate to go more smoothly, with both candidates getting their point across in a better manner. Well Americans were expecting that for the October 15th debate, but unfortunately that debate was cancelled in light of the recent events of President Trump’s Covid-19 diagnosis and the leaked twitter bias of the moderator Steve Scully of C-Span. This resulted in the two competing town halls, with Vice President Biden on ABC and President Trump on NBC. But last night’s debate was very anticipated and this one introduced a “mute button”. Kristen Welker had the option of muting one of the candidates if one was interrupting the other significantly. This policy seemed to work as it decreased the interruptions between both candidates, and they were able to get their point across and topics were understood in a more clear sense.

The Candidates on Covid-19:

The Coronavirus was the first topic of the debate naturally, because of the more than 220,00 deaths in the U.S. The President has expressed that his administration handled the pandemic responsibly by producing ventilators, masks, googles, gowns, etc. He also explained that he saved more lives by closing travel from China, causing the mortality rate to go down. Due to the President’s Coronavirus’s diagnosis, he has proposed for public access to the drug Regeneron and other drugs the President had access to during his diagnosis. He also introduced a vaccine that he states will come at the bare minimum of a few weeks from now, most likely by 2021. President Trump believes the virus will “go away” because of the administrations’ “success” in handling Covid. Vice President Biden feels that President Trump is responsible for the thousands of deaths in America, and him not taking responsibility means that he should not remain in office. Vice President Biden encouraged mask wearing, which he believes will save thousands of lives. Joe Biden does not believe the President has a plan for combating this deadly disease, and promises if elected he will have mask mandates, vast testing, and comprehensive plans to open up schools and businesses safely. President Trump combatted Vice President Biden’s claim that he is responsible for the many deaths in America, by saying while Joe Biden was vice president he handled the H1-N1 swine flu pandemic terribly. President Trump expresses that Americans can’t shut down their lives or lock themselves up in their homes, while Vice President Biden wants people to think on a deeper level about the loved ones so many have lost.

The Candidates on National Security:

Kirsten Welker started off this section of the debate, by bringing up interferences in our elections by countries like Russia and Iran, as there is evidence that these two countries are working together to influence the upcoming election. Vice President Biden promised that any country who disrupts the nation’s democracy will “pay a price”. He also believes the president should be more outspoken on this issue with Vladimir Putin. Juxtaposed to Biden’s claims, the President indicated that he was firm towards Russia and Putin. Another issue that was brought up was the foreign entanglements with both the President and the Vice President. President Trump brought up the accusations that Joe Biden profited millions of dollars off the Russian and Chinese government through his son Hunter after the emails were leaked to the public. The Vice President denied these claims, and added that there is evidence Trump has a secret Chinese Bank account, and questioned why the President hasn’t released his tax returns, an issue that has been disputed since the last election. There is disbelief over how much the President has paid in taxes as a story broke a few weeks ago that he only paid $75o in his first year of his presidency. Just like the Vice President, the President denied any corrupt foreign connections, and said he closed the Chinese bank account before he entered office. He indicated that he prepaid his taxes with millions of dollars. North Korea was the final subject of this section, and the President said he maintains a good relationship with Kim Jong Un, as he was the first president to meet with the North Korean leader. Vice President Biden wants to “control” the relationship with North Korea and feels that the President should have taken a more defensive approach.

The Candidates on Health Care:

The confirmation of Supreme Court Justice Amy Coney Barrett is was approved and she became the fifth woman to be on the Supreme Court, many have speculated she will overturn the Affordable Care Act that gives over 20 million Americans healthcare. In this section Kirsten Welker asked the President what he plans to do over the healthcare debate since he supports the repeal of Obamacare. He did get rid of the individual mandate so people would not have to pay a tax, and would like to terminate Obamacare while still protecting pre-existing conditions, and come up with a “better” healthcare system. Biden said if the Affordable Care Act is ruled as unconstitutional he will still pass a form of Obamacare into place with a public option and will dub it as “Bidencare”. He wants to make sure he will reduce premiums and drug prices, and accused Trump of being unable to terminate Obamacare and still protect pre existing conditions. Trump is worried that Biden will takeaway private insurance completely for the American people.

The Candidates on Poverty and Hunger:

Kirsten Welker started off this section talking about the millions of Americans who are unemployed due to the aftermath of the virus, and how this results in many going hungry. The president is supposed to be working on a relief bill, in which he said it hasn’t been passed because of Nancy Pelosi and the Democrats’ political motivations. The Vice President contradicted these comments by saying it’s the Republicans that won’t vote on it and get it passed. The Vice President used a quote he uses often during his campaign “I’m running as a proud Democrat, but i’m going to be an American president. I don’t see red states and blue states, what I see is American, United States.” Kirsten Welker continued the section talking about the struggling small businesses and asked the candidates if they should raise the minimum wage to $15. The Vice President supports this plan and would like to relieve these small businesses from their battles. The President believes raising the minimum wage would actually hurt the businesses because this could lead to lay-offs and he would rather have states make that decision depending on the circumstances.

The Candidates on Immigration:

This section of the debate started off with a major controversy of the Trump administration’s immigration policies, child separation at the border. More than 4,000 families were separated at the border and 500 children have still not found their parents, President Trump was asked what plan he has for reuniting families at the border. He answered by saying children brought to the border are brought by “coyotes, and lots of bad people, cartels”. He explained that he increased the strength at the border and people have to come here “legally”. He described criticism he received for building cages in the detention program when in fact the pictures were taken in 2014 during the Obama administration. Vice President Biden intensely acknowledged that these children were brought by their parents and separated from the he described the policy by saying “it violates every notion of who we are as a nation.” The President explained the facilities that he uses are clean and pristine. The Vice president combatted his massive deportations during his vice presidency with the notion that he will provide a path to citizenship for the current 11 million undocumented immigrants and promised to protect the children under the DACA program.

The Candidates on Race in America:

Race in America could not forget to be addressed during this debate as 2020 was marked as important year for the Black Lives Matter movement concerning the murder of George Floyd.  The Vice President described his empathy for black parents in America because of them having to teach their children protocols when they have encounters with police. He acknowledged systematic racism in America and the lack of opportunities for African Americans still after centuries and how he plans to combat these issues. The President also expressed his empathy for the families concerned about racial issues in this country and how Joe Biden actually made it worse for the African American community when he signed the 1994 crime bill which convicted a sufficient amount of African Americans for even small nonviolent drug offenses. The President also stated besides Abraham Lincoln he is the only president who has done an abundant amount for African Americans because of his policies about criminal justice, prison reform, and funding for historically black colleges. The Vice President push-backed on the President’s claims by bringing up President Trump’s involvement in the pushing for the death-penalty for the Central Park Five. The President explained he ran for President because of Joe Biden’s failed policies involving race and other topics they talked about during this debate. Kirsten Walker asked the President what he has to say about his controversial comments about the Black Lives Matter Movement, he responded by saying “I’m the least racist person in this room”.

The Candidates on Climate Change:

The President began this section with his love for the environment, he says the country has the best carbon emission numbers during his administration, and the cleanest air than other countries. The Vice President recognized Climate Change as an existential threat and plans to create millions of jobs, charging stations, and invest in the prevention of the leak of energy coming from buildings. The President illustrated that Joe Biden’s plan for climate will ruin the economy with his ties to the Green New Deal which is predicted to cost over 93 trillion dollars. The President expressed his concerns over windmills and how they are impacting health on Americans. This conversation led to the conversation about fracking, a topic on many occasions the Vice President said he was going to ban if he was elected. On Thursday night the Vice President push-backed on his comments about fracking and said he does not believe in banning fracking. The Vice President also said he would move away from the oil industry because of the pollution it’s resulting in.

The Candidates were asked what they would say on Inauguration Day to voters who didn’t vote for them. The President said he has had record unemployment numbers throughout his presidency with Black Americans, Hispanic Americans, Asian Americans, and women. The President described the economy as booming under his administration and if Biden is elected that it will all go away and taxes will go up. The Vice President put it into words that even if you will not vote for him he is still going to represent you and unite the nation, he will make things better for the economy and systematic racism, and he will treat you with respect because he believes that hasn’t been happening under the Trump Administration. The debate ended with both candidates hugging their wives and Kirsten Welker’s important message “Election date is November 3rd. Don’t forget to vote.”