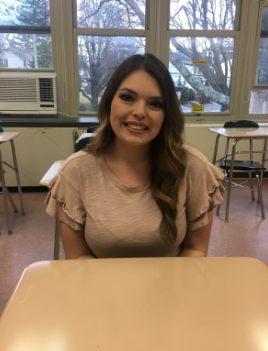 Ms. Kelly sitting at one of the desks in her Spanish classroom (room 201)

I met with Ms. Kelly who is a teacher here at Carle Place High School. She is a Carle Place alumna and also teaches Spanish to various grades. She had taught Italian in the past but now she focuses on teaching Spanish. Ms. Kelly has now recently took over as advisor for the Student Organization after the previous advisor, Ms. Fallik, has stepped down. I interviewed her to help me and the Carle Place community to get to know her better.

My first question was asking her why she wanted to become the advisor. She said that ever since her middle school career, she loved taking part in school activities. She had a strong sense of passion for school spirit and she said that her goal is to increase the participation in school events. She also wants to examine the traditions of this school and try to find ways to make them better. Ms Kelly has said herself that “fun events and planning things for students was the perfect role for me.”

Being the advisor for the Student Organization can require an immense amount of preparation and responsibility. Kelly has advised other groups in the past: she co-advised with Mr. Bello for the middle school for 2 years and with Mrs. Buffalino-Minkoff for the Class of 2020 when they were in their junior year. From this, she had learned what it takes to advise a big group of people and that she loves to make students’ middle and high school career as memorable as possible. Ms. Kelly was also a class officer when she was in high school, from 7th grade all the way to 11th grade. Although she unfortunately did not win the role of president of the Student Organization in her senior year, she still was very involved and prideful in her school. Her desire to be like how her advisors were to her was another reason she wanted to become an advisor.

Ms. Kelly is a very responsible person who likes to follow a plan for things that she does. When she teaches, she has a set schedule for everyday and does not like to go beyond each day or go off track. The same thing is for her advisor role; as soon as she received the news that she would be the new Student Organization Advisor, she immediately started to plan for the upcoming year.

As the new advisor, Ms. Kelly has the ability to put many changes in place. Some changes to Carle Place High School that she has already made are moving the fall and spring pep rallies to outdoors and making clubs more collaborative. The club calendar, which is used by all the advisors of the various clubs, has been made digitally. Also, she said that the role of the Student Organization has become more governmental. Every month, they meet with Dr. Finn, the superintendent of the Carle Place School District, and discuss any issues found within the school. Ms. Kelly says, “We are more than just an event planning group, we are the voice of the students.” 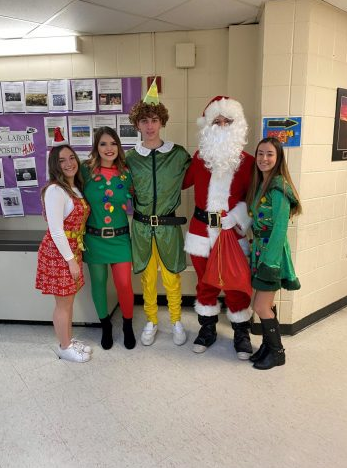 Mrs. GisondiMs. Kelly and the Student Organization dressed up for Christmas!

A key aspect of being the Student Organization advisor is planning events and fundraisers. One big event is the Battle of the Classes, which is sometimes abbreviated to BOTC. Every year, Battle of the Classes raises money and awareness for a different cause. This year, we will be fundraising for Pompe disease. Dr. Finn’s Secretary, Mrs. Favicchia, has a 4-year old daughter who has Pompe disease. As well as raising money, those who participate in Battle of the Classes will also take part in events and games. The Key Club, which is advised by Mrs. Buffalino-Minkoff, and the Student Organization have been working very closely this year to plan BOTC. This year, there will be some new events, like a hula hoop relay, and some old events have been taken out based on the feedback given by the students. However, most of the events have stayed the same. They hope that this will encourage more people to participate. In addition to new events, there is also a new pre-check system this year. To make it easier for the advisors of each grade and to avoid the chaos when checking in the night of Battle of the Classes, participants will now be able to check in during school. They also planned to provide food and drinks during the night.

Battle of the Classes is not the only fundraiser this year. The CP Nation shirts that have been sold this year is a major fundraiser of the year. 100% of the profits made from these shirts is donated to charity. The biggest fundraiser is the Homecoming Dance. The profits made from this is what is used to give back to us, the students. The money will be used on things such as new pencils on the first day of school or the food and drinks at BOTC. A new event that is being put in place is pop-up events during the week of Battle of the Classes. This is the week of February 28th, so the entire week would have these new pop-up events. A message would be sent throughout the school in an attempt to raise participation and school spirit.

The current Student Organization of the 2019-2020 school year is made up of Maximillian Buck as President, Sarah Beattie as Vice President, Emma Beattie as Secretary, and Michael Buffolino as Treasurer. They are all members of the Class of 2020, so they are all currently seniors. According to Ms. Kelly, they have all been very adaptable to new changes being put into place this year and they are not scared to go against old traditions of the school. Their ability to rise to the occasion every time something is asked of them fills Ms. Kelly with a sense of pride.

Not only does Ms. Kelly teach at Carle Place High School and advise the Student Organization, but she also enjoys to travel. One of her own personal life goals is to travel to 30 different places before she reaches 30-years old. She is currently very close to accomplishing this- she has visited 27 different places so far. She states that all the places she has been to are all different in their own way. However, one of her top three places is Mozambique. She loves to explore the different cultures of the entire world.

Ms. Kelly is very excited for these upcoming years of her advisorship. She plans to make as many changes as she sees fit and hopes that students will soon start to participate in school events again. Her passion and responsibility will help her achieve her goals she has for Carle Place High School.