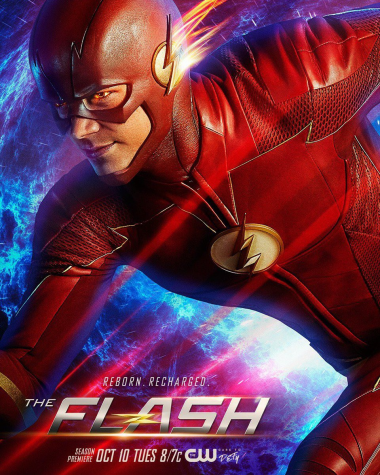 ​
Barry Allen is the fastest man alive. After a man named Harrison Wells made a particle accelerator that blew up, energy from that detonation was thrown into the sky and that in turn seeded a storm cloud that created a lightning bolt that struck Barry Allen (The Flash). To prevent from giving too much away, when Barry was a child his mom was murdered by a mystery man in a yellow suit. The cops blamed Barry’s dad for the murder because of lack of evidence and Barry’s dad got a life sentence in prison called Iron Heights. When Barry was 11 when he was adopted by his best friend’s (Iris Ann West) father Joseph “Joe” West. When Barry got struck by lightning he went into a coma for 9 months and as he woke up he met two scientists (Cisco Ramon and Caitlin Snow) working for his idol Harrison Wells, another scientist who founded S.T.A.R Labs. In my opinion The Flash is one of the best superhero/sci-fi shows. The actors are in the show are Grant Gustin as Barry Allen/ The Flash, Candice Patton as Iris Ann West, Tom Cavanagh as Harrison Wells, Jesse L. Martin as Joe West, Carlos Valdes as Cisco Ramon, and Danielle Panabaker as Caitlin Snow. If you’re interested in watching The Flash you can watch five seasons on Netflix and or on an app called The CW. If you are all caught up, then you can watch The Flash on channel 11 at 8:00 pm on Tuesdays. Thank you for reading, I hope you check out the show.